A new study released today shows that the U.S. aluminum industry directly employs more than 164,000 workers and drives $73 billion in direct economic output. Overall employment in the domestic aluminum industry has been largely steady for most of the past decade though jobs overall did decline slightly between our 2020 and 2022 studies. In total, the U.S. aluminum industry supports more than 634,000 direct, indirect and induced jobs and nearly $176 billion in economic output. The 2022 Economic Impact of the Aluminum Industry study was completed by economic research firm John Dunham & Associates in March 2022 (with the impact data finalized in January 2022). The report uses standard econometric models first developed by the U.S. Forest Service and now maintained by IMPLAN, Inc.

Estimated aluminum demand in North America was up 7.7% year-over-year in 2021, significantly outpacing U.S. GDP growth. In the past year, the industry has collectively committed or invested nearly $1 billion in U.S. manufacturing -- adding to the more than $4 billion invested over the past decade. The international picture is also positive. The International Aluminum Institute recently released a report developed by CRU Aluminum projecting that aluminum demand will grow by nearly 40% globally by 2030 – with significant growth in North America.

“We’re incredibly encouraged by the position of the U.S. aluminum industry today, “said Charles Johnson, president & CEO of the Aluminum Association. “Like all manufacturers we face some headwinds during these uncertain times, but our underlying demand and investment picture remains quite robust. This is a resilient sector of the American manufacturing economy.”

Certain segments of the industry thrived while others were challenged amidst COVID-19 driven disruptions over the past two years. Secondary aluminum production (recycling) (+7.3%); aluminum coatings (+6.2%); and sheet & plate (+5.8%) jobs all increased notably between 2020 and 2022.

After showing signs of improvement in our 2020 study, primary aluminum production (-9.6%) jobs declined with some plant closures and curtailments occurring during the period. Jobs in aluminum forging (-10.5%) also dropped by more than 10% between these studies likely due to COVID-driven declines in major markets like aerospace. Taking the long view, U.S. aluminum jobs have stayed essentially flat over the past decade despite the loss of more than 8,000 jobs in primary aluminum production – a 65% decline. 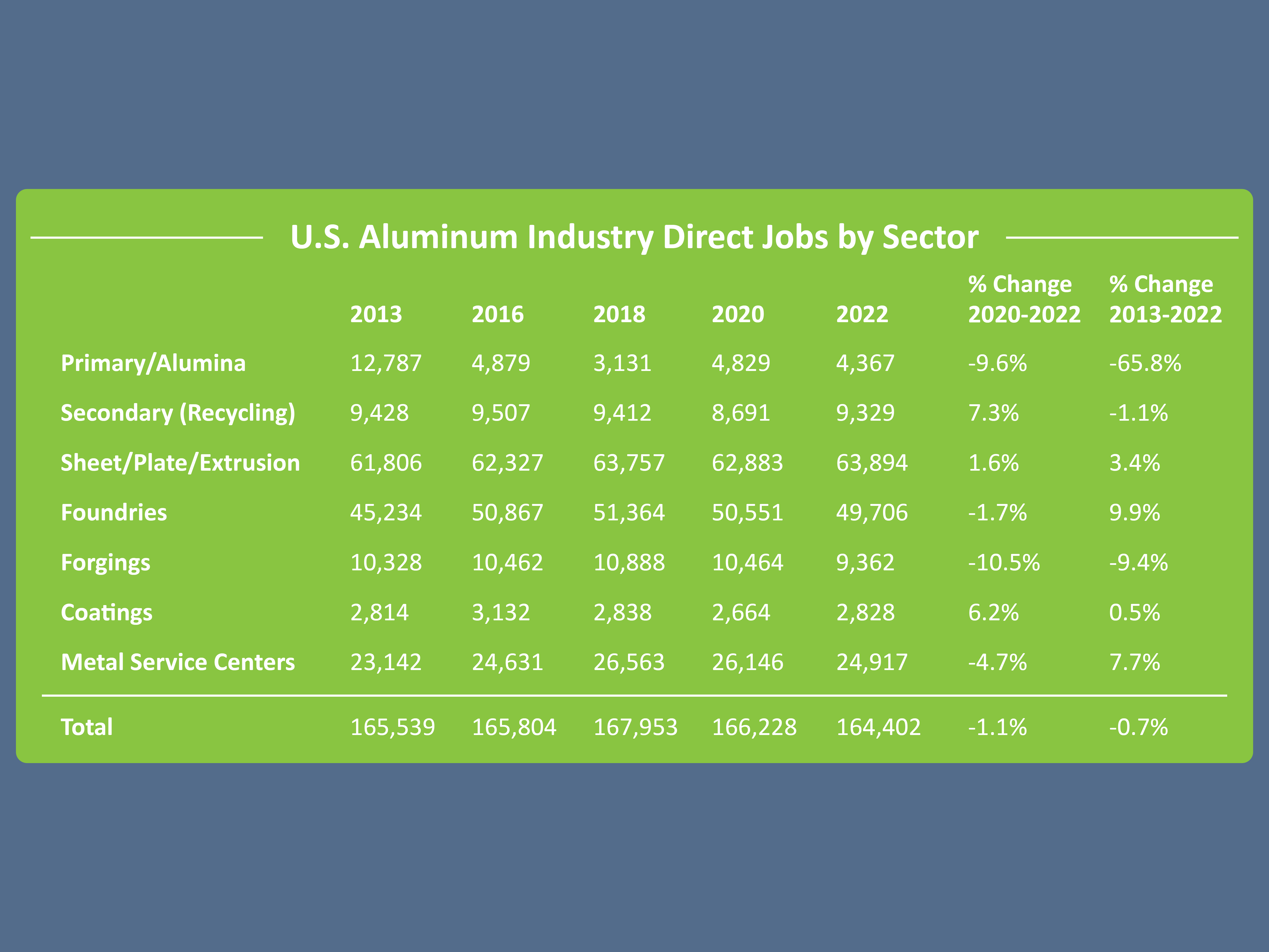 “These trendlines are an indication of U.S. aluminum’s ability to adapt and innovate. Even as we’ve seen declines in some areas, we’ve seen notable growth and investment in others,” added Johnson. “At the end of the day, America remains one of the best places in the world to invest in aluminum.”

Today’s report is an update of a study completed in 2013, 2016, 2018 and 2020. Data from prior years’ studies have been reviewed and updated for accuracy, providing the most up-to-date and comprehensive information on the U.S. aluminum industry’s economic impact.

Other key findings in the report include:

For the purposes of the report, the aluminum industry is defined to include alumina refining; primary aluminum smelting; secondary aluminum production; manufacturing of aluminum sheet, plate, foil, extrusions, forgings, coatings, and powder; aluminum foundries; metals service centers, and wholesalers. The study measures the number of jobs in this industry, the wages paid to employees, total economic output and federal and state business taxes generated.

The complete study, including an interactive map with economic contribution breakdowns by state and congressional district, is available at www.aluminum.org/economy.

About The Aluminum Association
The Aluminum Association represents aluminum production and jobs in the United States, ranging from primary production to value added products to recycling, as well as suppliers to the industry. The association is the industry’s leading voice, representing companies that make 70% of the aluminum and aluminum products shipped in North America. The association develops global standards, business intelligence, sustainability research and industry expertise for member companies, policymakers and the general public. The aluminum industry helps manufacturers produce sustainable and innovative products, including more fuel-efficient vehicles, recyclable packaging, greener buildings and modern electronics.  In the U.S., the aluminum industry supports $176 billion in economic activity and more than 634,000 jobs. For more information visit https://www.aluminum.org or find us on Twitter, LinkedIn, Facebook or Instagram.