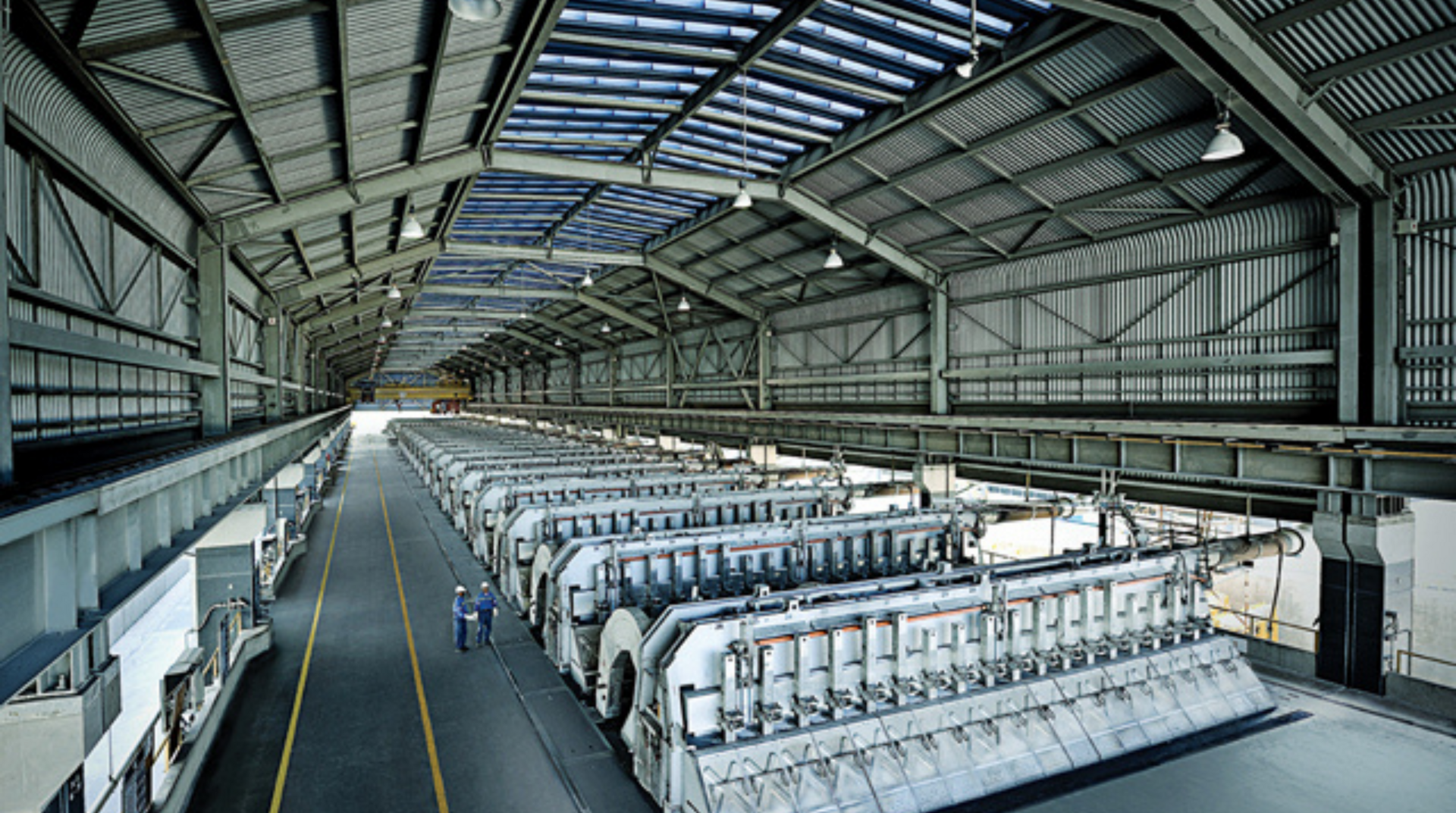 Primary production is the process by which alumina is smelted to pure aluminum metal. The Hall–Héroult process, simultaneously discovered in 1886 by American Charles Martin Hall and Frenchman Paul Héroult, continues as the main industrial process by which primary aluminum is made.

How Aluminum is Made

Primary production is the process through which new aluminum is made (versus secondary production, in which existing aluminum is recycled into pure metal). Aluminum originates from bauxite, an ore typically found in the topsoil of various tropical and subtropical regions. Once mined, aluminum within the bauxite ore is chemically extracted into alumina, an aluminum oxide compound, through the Bayer process. In a second step, the alumina is smelted into pure aluminum metal through the Hall–Héroult process.

The Hall–Héroult process: How primary aluminum is made

In the Hall–Héroult process, alumina is dissolved in a molten cryolite bath within a carbon-lined steel pot. Carbon anodes are inserted in the top of the bath and an electric current passes through the anodes and the bath. Oxygen atoms separate from the alumina and combine with the carbon anode, leaving the remaining molten aluminum at the bottom of the pot. The molten aluminum is periodically siphoned out and placed in a holding furnace. From the holding furnace, the molten aluminum is cast into an ingot.

History of the Hall–Héroult process

Charles Martin Hall, a 20-year-old first-year student at Oberlin College (Ohio), began research to produce aluminum in 1880. Hall’s efforts were focused on methods to use electric current to extract pure aluminum from alumina (an oxide compound that contains aluminum and oxygen). One of Hall’s first challenges was to determine the correct liquid in which to dissolve the aluminum oxide. The use of water did not yield successful results; passing electricity through a water solution caused the water to break down into hydrogen and oxygen. Hall’s experimental approach was to dissolve alumina in another mineral, cryolite. On February 23, 1886, Hall had his first success. After running current through his equipment, small amounts of aluminum were precipitated. The Hall–Héroult process was invented independently and almost simultaneously in 1886 by Paul Héroult, a French chemist. In 1888, Hall opened the first large-scale aluminum production plant in Pittsburgh. The Reduction Company of Pittsburgh later became the Aluminum Company of America, then Alcoa.

The role of electricity in primary production

The processing of aluminum became economically viable when large-scale electricity was produced. Today, electric power represents about 20 to 40 percent of the cost of producing aluminum. By national average, aluminum production consumes approximately 5 percent of electricity generated in the United States. Although continual progress has been made over the more than 110-year history of aluminum processing to reduce the amount of electricity used, there are currently no viable alternatives to the Hall–Héroult process.

Since 1991, the energy needed to produce primary aluminum has dropped by 27 percent and the carbon impact of primary aluminum production declined by 49 percent. Aluminum produced in North America, which relies heavily on renewable hydropower, is among the cleanest in the world. And companies are innovating with new inert anode technologies that eliminate all direct greenhouse gas emissions from the primary smelting process.